Create an Account - Increase your productivity, customize your experience, and engage in information you care about.

Upson County was established by an act of the state legislature on December 15, 1824. The Treaty of Indian Springs (1821) between the United States and the Creek Indians gave the government the land that extended from the Ocmulgee River to the Flint River through middle Georgia.

Upson County was created from Pike and Crawford counties. Many settlers were drawn to the area by the lottery system used to settle the acquired lands. The state's fifty-ninth county was named in honor of the noted Georgia lawyer Stephen Upson (1784/5-1824) just four months after his death. It is also the birthplace of John B. Gordon, a major general in the Confederate army and a governor of Georgia.

Upson County has a total land area of 326 square miles and 592 miles of roads. The City of Thomaston is the county seat. Other incorporated areas include The Rock and Yatesville. 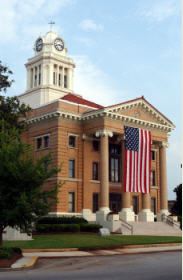